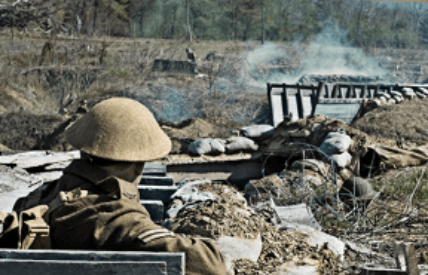 The GWA strives to keep alive the history of the Great War, and honor those who fought it’s battles, through battle reenactments and educational events. Our membership recreates many of the sights and sounds of the 20th Century’s most significant conflict. In addition to various special events around the country, the GWA owns the Caesar Krauss Great War Memorial Site near Newville, PA. Here, on a 100 acre site in south-central Pennsylvania, we have authentically recreated a portion of the Western Front as it may have appeared circa 1917-1918.

Our battle reenactments take place within systems of opposing trenches complete with a crater-pocked No-Man’s Land. There are belts of barbed wire, used to protect the sandbagged front line trenches, and the opposing positions are punctuated by bunkers with functioning machine-guns. Behind the main lines are supporting and communication trenches, connected to underground dugouts, where officers plan operations and the common soldiers eat and rest.

From the moment you arrive at an event you will be submerged in the Great War. From the clothing you wear, to the food you eat, to the trenches you fight in – nothing is out of place! World War One reenacting is truly, “The Reenactor’s Reenactment!”

From history to practice, the Great War Association strives for the elite authenticity standards.

Your ticket for the: Winterline